Poking fun at your own brand feature can be a risky move, especially when that feature has already had to stand up to considerable user criticism.

But VW’s a brand with considerable experience and wisdom, which is possibly why the vehicle manufacturer — whose name literally means “people’s car” when translated from German to English — manages to be both self-effacing and to create a charming commercial that beautifully positions its new, green innovation.

The backstory is that vehicle manufacturers are increasingly under pressure to reduce carbon emissions, and the Start/Stop system cuts the engine when the car is not in motion. This has been shown to create between 7-9% greater fuel efficiency in town driving. Engine restart is quick and efficient, but it does take a little getting used to, especially in automatic models.

It’s an alternative approach to reducing fuel consumption, as opposed to the increased manufacturing cost of developing a hybrid engine, which is essentially two (or more) motors in one. Volkswagen’s BlueMotion Technologies also include strategies such as recuperation (recycling energy normally lost during braking); low rolling resistance tyres; and aerodynamics.

But let’s get back to that endearing advert, shan’t we? 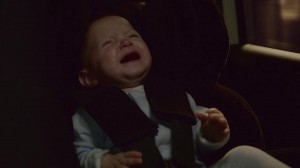 Many parents have discovered (by word-of-mouth or through trial-and-error) that their newborn baby can be more easily soothed to sleep by the vibrations of a car. Some people have been known to make the evening drive part of an infant’s going-to-bed routine because, when Junior can’t sleep, s/he can drive anyone to desperate measures.

The ad starts with a VW Tiguan driving down a deserted town street at night. The soundtrack starts: ‘Go to Sleep My Darling Baby’ — a 1950s hit originally by the DeZurik Sisters. In the back of the car, safely strapped into a baby seat, is a child, fast asleep.

The car rolls to a halt at the traffic light, and — click! — the engine switches off. Within a second, the baby wakes up, looks around… and starts to cry. The light turns green, the car pulls off — and the crying stops.

The dad has a wonderfully ‘new father’ look about him… bags under his eyes, with an expression that implies that he is resigned to his fate. At the next red light, Dad tries to cheat fate by slowing down well before the intersection but sadly mistimes it; the engine goes off, and Junior wakes up bawling again.

At the next intersection, another Tiguan pulls up beside him and, yes, there’s another dad with a crying baby in the back. The dads exchange wry glances as the light turns green and they pull off.

The voiceover reassures: “At least you’ll save money on fuel.” Which is, let’s face it, why Dad originally bought the car — to help save the planet for future generations.

The TVC was produced in London by Adam&EveDDB and, although I prefer to focus on local ads, I thought this one has the kind of universal appeal that makes it worth highlighting.

Most young parents will identify with the story, and it’s part of VW’s smart strategy to rebrand its vehicles as family cars, moving away from its previously established image of sporty or fun cars for the young, single person.

Features such as fuel efficiency, safety and comfort are now part of VW’s more ‘grown-up’, credit-crunch-era image: a wider range of models to suit most markets, and BlueMotion technology to save the planet.

Perhaps the dad in the commercial was too tired to read the manual, but there is, in fact, a switch to turn the Stop/Start technology off; he might have been able to lull his child back to sleep a lot sooner if he’d known this!

By sharp contrast, VW is wide awake in the brand game. Those of us who have children and who are ‘greenies’ want to make better choices that will benefit our offspring, and VW cleverly plays directly to this market.