One of SA’s most popular homegrown inventions, the Kreepy Krauly, is as much a part of the South African way of life as braaivleis and rugby. For many it’s a ‘creature’ that seems to have a life of its own as it wanders around the pool, gobbling up dirt and leaves.

In an online campaign, Pentair, the US company that now owns Kreepy Krauly, has embraced the South African ethos and allowed agency Ebony and Ivory to have fun with a very “local is lekker” campaign. It’s a three-minute mockumentary that features a ‘Kreepy wrangler’ — played by Jason Goliath.

The character is reminiscent of the protagonist in Wes Anderson’s 2004 comedy, “The Life Aquatic with Steve Zissou” — a man driven by a deep desire to hunt and destroy an almost mythical water creature. And just like the ‘Life Aquatic’ characters, Goliath and his sidekick wear red woolly hats… so I’m pretty sure this reference is not coincidental. That being said, the humour of this ad is pure South African — crazily corny, deadpan silly, and slightly slapstick.

Goliath’s character, Kris Jnr, is dedicated to seeking the Kreepy out, and capturing it “before people realise there’s a problem.” In this mini-movie, Kris Jnr is being interviewed documentary-style, and the overlay visuals are of him getting ready for a ‘hunt’. He wears waders and a weird assortment of equipment dangling off his battle-vest, while his sidekick has more traditional navy attire, and swimming goggles.

To illustrate his talent for hunting these pool creatures, Kris Jnr uses his sidekick, Barry, as a demonstration model, lifting him clear off the floor to show how he immobilises a ‘Kreepy’. “Keep the head away from you, because just remember, this thing can bite!” he explains, continuing: “People became scared because it was like a horror movie, you could hear him. I used to hear him in my sleep” — and the scene cuts to Kris Jnr waking up from a nightmare.

The distinctive sound of a Kreepy Krauly is a result of its design, and what makes it unique. But where did it all start? 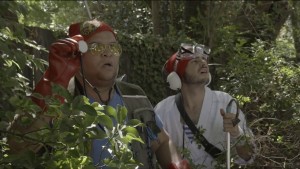 The story goes that a young man, Daniel Chauvier, made a living selling pool chemicals door-to-door; and noticed that most people he sold to complained about the time spent maintaining — raking, brushing and sweeping — their pools. Chauvier’s father, a refugee from the then Belgian Congo, applied his skills as a hydraulic engineer to help him design and prototype an automated pool cleaner, using wood and rubber, in their kitchen.

Chauvier asked some of his customers to trial the machines, and found it very hard to persuade them to give them back: he had a product that could satisfy a huge market need. The wood and rubber were replaced with injection-moulded parts in 1978, and since then the design has hardly changed — its main feature being that there is just one moving part, and the entire mechanism is powered by the pool’s own pump system.

That sound, which Kris Jnr describes as its “heartbeat”, is now being modified and, if anything, that is the one sales message that is being promoted in the ad. As Kris Jnr sees it, “I think they knew that I was coming for them, and they had to find a mechanism to evade me, becoming almost silent.”

The final scene is of Kris Jnr and Barry using a stethoscope and microphone to track down a ‘Kreepy’ — which they then wrestle from the pool, amid much thrashing and splashing. “That, my boy,” Kris Jnr says to Barry, “is how you wrangle a Kreepy.”

The humour is absurd and one has to give a big thumbs-up to parent company Pentair for allowing its product to be abused in the name of comedy; a more conservative company would balk at that.

At this stage the mini-movie movie is only available on YouTube. Hermias Nel, national sales and marketing manager at Pentair Water, SA, explains the strategic decision: “It is important not only to improve our products, but also our communication methods. We realise the growth of the YouTube platform, especially in South Africa, and the need to develop strong brand narratives as opposed to disruptive advertising.”

The video production was by Team Best, and the digital and seeding was done by Retroviral Digital.

The effectiveness of a digital-only campaign like this is dependent on various factors, and results may vary wildly, depending on the uptake from the market — ie whether or not it manages to ‘go viral’ and continue to be spread by people on Facebook, Twitter and Google+. Sometimes results are fantastic but, too often, even good stuff is buried in the clutter of Kim Kardashian, Justin Bieber and Miley Cyrus that seems to rule the YouTube domain.

YouTube’s becoming the perfect place for clever brands to seed mini-movies with the potential to go viral. Given how watchable the Kreepy creature flick is, it’s likely to get more than its fair share of clicks.