It’s that time of year when many of us can look forward to a few weeks off from work, and a nostalgic look over the shoulder at how the (ad) world has turned for the past 12 months.

It’s been a good year for advertising and brands, and it’s been hard to single out the single ad that I would nominate as “Ad of the Year”. In fact, using the very scientific method of reviewing all my Ads of the Week, I’ve decided on a “Top 10” countdown of the best of the Best Ads of 2013. Here they are, with no apologies, and no prizes:

Yellow Pages and agency 360eight hit this one out of the park for what may have previously been considered a conservative brand. In a wonderfully tongue-in-cheek ‘mockumentary’ of the life of Henri Delatissier, a demigod of the plumbing world, Yellow Pages promoted its very user-friendly website atwww.yellowpages.co.za.

The message of the ad was simple: in a pinch, you don’t want to find Henri when you urgently need a plumber (or a doctor or whatever). So the normal search engines won’t be of much use. What you need is a site that allows you to find suppliers in your area. So, in this unique, humorous and clever ad, Yellow Pages brings its message home.

Like many in my shortlist, this ad uses humour to great effect. It features a fantastic actress who looks like a kugel from Sandton, but — in a wonderfully South African role-reversal — uses her command of isiZulu to put another customer in her place. (The target of her diatribe is a woman who thought it would be safe to criticise the ‘kugel’ for being indecisive.)

It’s all about assumptions and stereotypes, while establishing the brand as a fast-food competitor that appeals to the everyman.

The agency is Red Rocket and the production company is Velvet.

8. Miracle on the Hudson – Nedbank

This was a big-budget production that certainly had a huge impact. It is a dramatic, emotionally powerful recreation of Flight 1549, the Airbus A320 that was forced to land in the Hudson River after a bird strike put both of its engines out of commission in January 2009.

Filmed in New York, with awesome CGI done here in South Africa, the TVC is a showcase for agency Brandlab and director Ian Gabriel of Giant Films.

The ad celebrates the soft-spoken Captain ‘Sully’ Sullenberger’s heroic and professional actions in the face of extreme danger; actions based on rational thinking and experience that saved the lives of 155 people.

he payoff line, that links the event to the banking group, is: “In the right hands, anything is possible.”

7. How to wrangle a Kreepy – Kreepy Krauly

Humour, with a very distinctive South African twist, makes this ad one that’s sure to appeal to its target market. Normally, marketers want to make the brand the hero but, in a daring role-reversal, this piece of absurdist wackiness shows the product being demonised and abused.

Featuring comedian Jason Goliath in a spoof of “The Life Aquatic with Steve Zissou”, the ‘mockumentary’ documents the life of Kreepy Wrangler Kris Jnr, who has dedicated his life to ridding South African pools of this ‘wild animal’ — the Kreepy Krauly.

The ad is made for YouTube, rather than TV, which allows for a longer, three-minute mini-movie that shows potential to go viral. It’s interesting and exciting to see the internet medium being used for entertainment that also has a message.

The video production was by Team Best, and the digital and seeding was done by Retroviral Digital. 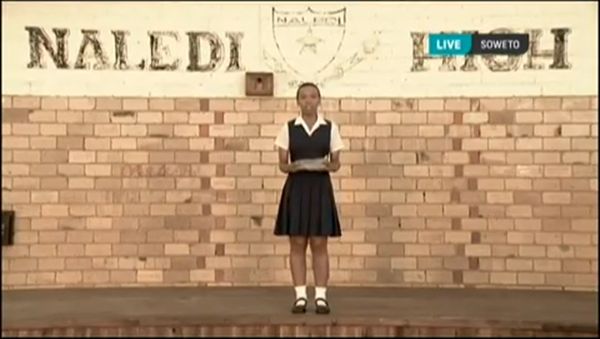 A little girl stands up in front of her school and delivers a speech critical of the government — surely one of the seminal moments in SA ad history this year.

The speech was a conglomeration of statements made by school children, as gathered by an independent research firm hired by the bank. The ruling party was deeply offended by the campaign, as was The Presidency.

We all know that the advert has been a massive political issue, and context is everything, but it’s important to look at the marketing, brand and creative merits of this campaign.

To back up the campaign, FNB had a site www.youcanhelp.co.za, as well as social media footprints on Facebook and Twitter. (#littlehelps). The website is still running, with ‘stories of help’ as part of the bank’s continued involvement in social activism.

Before the political brouhaha, which evoked a whole range of emotions to the ad — from anger to fear, and more politically measured responses — came what I believe were more authentic, emotive responses. There was a genuine bristle of excitement ahead of the airing of the ads and the campaign certainly created a massive buzz.