Press freedom is one of the cornerstones of democracy. Since Edmund Burke coined the term “The Fourth Estate” in 1787, the press has been considered a watchdog for the public interest, against government, clergy, business or any other force overstepping its legal or moral bounds.

The press as a protector of public interest been something of an issue in South Africa in recent months, what with our president calling for “patriotic reporting“ in September and the controversial “Secrecy Bill” having been passed by Parliament in April. Not to mention the perfect example of the “Streisand effect” that resulted from government’s ‘ban’ on publishing pictures of Nkandla last week. 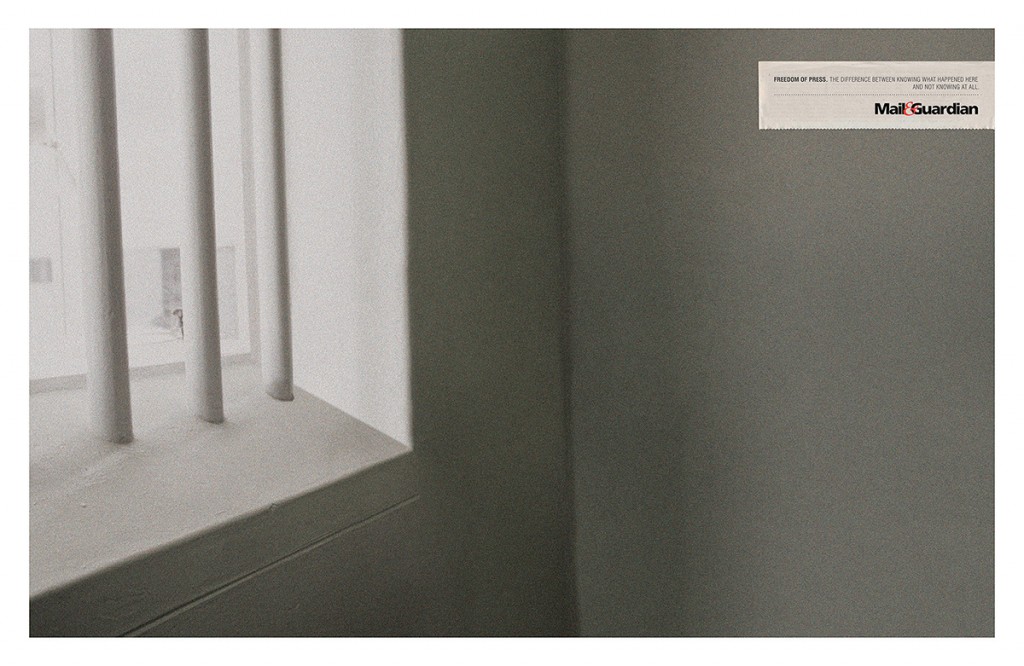 The Mail & Guardian weekly newspaper is well known for its oppositional stance in SA politics, and once again has made its position clear with its latest print campaign, “Freedom is Knowing”, prepared by TBWA\Hunt\Lascaris Johannesburg.

The ads show iconic scenes from historic press photographs — but with a difference: the subjects have been airbrushed out of the images.

The slogan is simple: “Freedom of Press. The difference between knowing what happened here, and not knowing at all. Mail & Guardian.”

The executive creative directors are Adam Livesey and Matthew Brink, the creative director is Justin Wright, and the copywriter for this campaign is Natalie Rose. All that careful airbrushing and retouching was done by Rob Frew.

Sharp-eyed critics and art buffs have already pointed out that the concept is not entirely original. In 2009, photographer and artist Pavel Maria Smejkal used this concept in his collection called “Fatescapes”, wherein he took scenes from war and removed the people and the machinery of war. 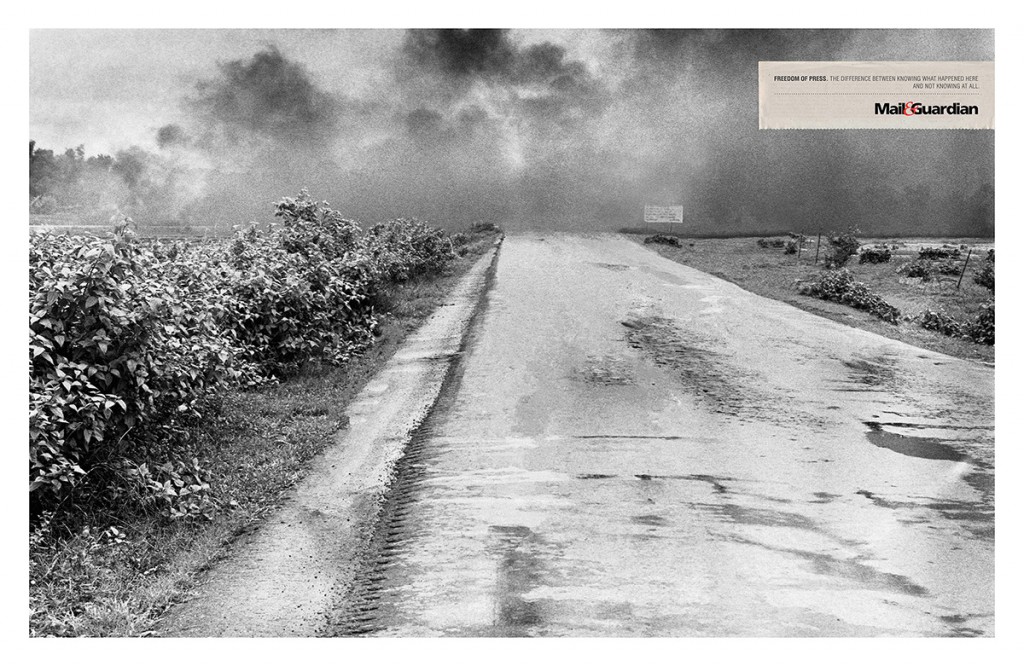 Smejkal explained his approach thus: “I use images that have become our cultural heritage, constitute the memory of nations, serve as symbols or tools of propaganda, and exemplify a specific approach to photography as a document of the historical moment. […] Aware that their authenticity is not unquestionable, I return to these key images after they have been reinterpreted numerous times from various perspectives, and by manipulating their content I explore their purpose, function, and future.”

The artist’s picture of Tiananmen Square, for example, is poignant: instead of a man standing in front of a tank, there is just the empty street; but it is nonetheless hauntingly familiar and iconic. Perhaps the Chinese government would have preferred this ‘truth’ to what the world saw on that day. 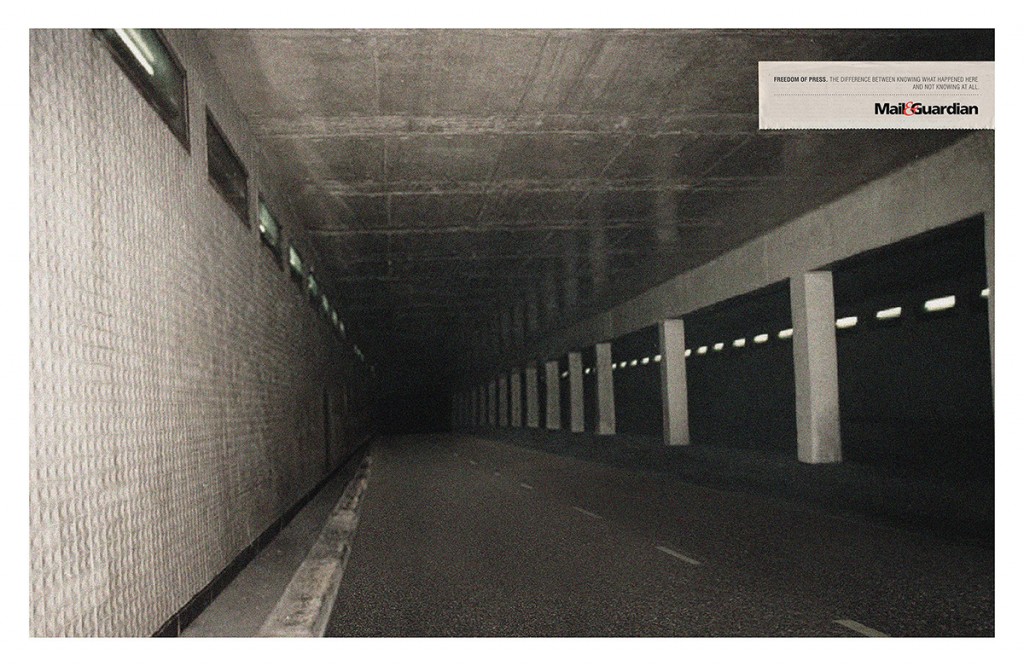 No doubt many despotic leaders would gladly remove embarrassing blots from their history, and varnish over the cracks.

What is truly original?

Should the creators of this ad campaign have acknowledged Smejkal’s influence? Perhaps, but then again, what is truly original? And when it comes to this campaign, context is everything.

There is only one scenario that is common to both the original artist’s and this M&G campaign. It is that of the street in Vietnam where, in 1972, a girl was filmed running from her village, her clothes having been burnt off by napalm.

And, while Smejkal’s works tend to look at the landscapes from war scenes, the M&G campaign focuses on more recent events that are probably more relevant to South Africans.

I think that, even though the basic premise is the same, the message is quite different — particularly when viewed in the context of the South African ethos.

Imagine a country where we didn’t have access to information, and both local and international events were airbrushed into nothingness. The result is imagery that is as evocative as it is haunting.

My only criticism would be that there could have been more ‘local content’ which is a hot talking point, such as— for instance — Jacob Zuma and Nkandla.

Of course, even democratic governments and ethical corporations hire spin-doctors to handle bad fallout when things go wrong, or to promote ideas that are anticipated to meet popular resistance. That said, as citizens we have to be discerning, even sceptical, about what we read.

Although we will always trust the media that agree with us, there is of necessity a mistrustful relationship between the populace and the press. For the real sceptics there are sites such as Snopes and Factcheck, and in SA we have the newly created Africa Check that investigates claims and spin made closer to home.

Given that the Weekly Mail (in its time) and Mail & Guardian (its successor) campaigned for an end to apartheid, and has subsequently been fearless in uncovering scams and scandals, from the arms deal to Nkandla, it’s fitting that the weekly investigative newspaper should attach its brand to the concept of media freedom.

As relevant now as ever

This campaign, with its simple, clear slogan and arresting photographic imagery, brings home a message that is as relevant now as it has ever been in the SA context.

Media freedom must be preserved in SA and, when it comes to protecting the public interest, there is no organisation better placed to do it than the likes of the Mail & Guardian.