Coca-Cola is the global brand that proves time and again that it knows its market well. But, more so, it really understands how to connect with that market. Just in time for summer, when the pressure to grow market-share is on, Coca-Cola has launched an astute, bright campaign that makes its customers the hero of its marketing.

Since the beginning of November 2013, South Africans have been able to buy cans and bottles that have the wording “Coca-Cola” replaced with 600 of the country’s most common names. Produced by Draftfcb with Velocity Films, the television commercial (TVC) that goes with this #ShareACokeZA campaign is called “Share a Coke with Bobby”, featuring a gorgeous black-and-white border-collie-cross-pit-bull.

Flown in with her trainer from Los Angeles for the shoot, the clever-cross-collie’s real name is Jules but she plays Bobby in the commercial movie, where the dog searches for a can or bottle of Coke with ‘his’ name on it. (The actress may be a female, but for the sake of simplicity I’m going to go with “him”.) 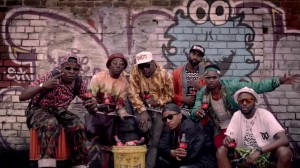 The ad is set in downtown Johannesburg, and the producers elected to use local youngsters instead of actors, and this tactic really works well.

“Coke as a brand is all about authenticity,” says Jonathan Deeb, executive creative director on the shoot, in a movie about the making of TVC. He continues: “And when you’re talking to young people, you can’t pull the wool over their eyes. So, when it came to casting, we found real people who are brands within their own right… really cool, genuine, authentic young kids who have just got something going on.” 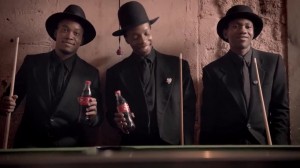 The various “kids” create a colourful backdrop for the main story, which is Bobby’s quest for his eponymous bottle or can of Coke. Bobby travels throughout the city, going from one Coca-Cola scenario to the next, hunting for the elusive bottle. En route between the fridges and cooler boxes, he encounters hip-hop crews and puppeteers, skateboarders and a rooftop pool-party.

“That’s not my name”

The music used in the TVC is “That’s not my name” by garage-punk-pop band, The Ting Tings. (If you’re a music aficionado, you’ll know that The Ting Tings are a UK band which had a hit in 2008 with that very likeable tune.)

It’s a catchy song, and the lyrics resonate with Bobby’s search, because everywhere he looks there are cans and bottles with names on — just not his. At the same time that Bobby’s on the hunt, we get to see the young people enjoying the fun of finding their name on a Coke.

Bobby wanders through hair salons, restaurants… up and down stairs, until finally he arrives on a rooftop where a small group of dogs are gathered — yes, it’s a dog party! Bobby turns around to see his name up in lights on the Coca-Cola billboard. Excited by this, Bobby does a twirl and a jump, and all the other dogs celebrate with him. It’s pure fantasy, but at the same time it’s endearing and heart-warming.

In addition to the TVC, the Coca-Cola Facebook page features an app that allows you to make a “virtual” can with your name on it, which is helpful if your name is unusual, like say, Oresti.

Coca-Cola is also hosting events in five provinces, where you’ll be able to go and have a customised can made. These events seem to have been successful overseas, showing that consumers enjoy interacting with this brand, and that this brand is very good at building upon the relationship.

Another way to interact

The hashtag #ShareACokeZA is also being used by people posting pics of themselves (or their pets) with their personalised Coke on Twitter or Instagram. No prizes are being offered — it’s just another way for Coca-Cola customers to interact with the brand.

Coca-Cola shows how it’s done with a smart interactive campaign that will doubtless drive good sales this summer.