Anyone who’s been through school will know that those two lines are from one of the darkest plays ever written by Shakespeare: ‘Macbeth’. A teaching tale about what comes from using evil as a means of achieving power, the particular scene quoted comes from a pivotal moment in the play.

It is in this scene that the flawed hero of the eponymous piece is told by the witches that he is to become the king of Scotland.

Now, everything your average person knows about witches (or warlocks) comes from plays like this, or from fables and stereotypes that are perpetuated by society. Which is why it was fun to stumble across the new MWEB radio ad, in which distinctly local, South African witches are the protagonists of the commercial.

The advert is very tongue in cheek, so it does resort to stereotypes about witches to get its point across, but it does this with a modern twist.

Unfortunately, this ad about witches and their need to get socially connected has caused a bit of a hullabaloo, but I think that this is a storm in a cauldron.

South Africans have a great sense of humour; then there’s the fact that we’re notorious for taking the mickey and for self-irony. Given this, it really did sadden me to discover that MWEB’s ads caused a flurry, and I feel that this may be a case of political correctness taken too far.

The MWEB radio ad that features witches was recorded in isiXhosa and flighted in January 2014. Luckily you may still watch the YouTube clip (posted above) with written English translations.

I thought it was laugh-out-loud funny, and I don’t think anyone with a reasonably mature sense of humour would think otherwise.

Starts with an explanation

You’ll see that the video for the ad starts with an explanation. “In Xhosa folklore,” it reads, “Gwadana forest in the Eastern Cape is where witches and sorcerers are reputed to meet in the dead of night. However they are moving with the times and meeting online on social media platforms.”

“On Facebook there are such groups as ‘Amagqwirha ase EC (Witches of the Eastern Cape)’ which have recently sprung up, where they discuss their latest acts of sorcery and the latest trends in witchcraft,” the YouTube recording states, before the ad commences.

With sounds of owls hooting and excited chattering in the night, the ad begins: “Greetings, witches and sorcerers. Thank you all for coming tonight. I know it can be difficult at times making it to these gatherings of ours here in Gadwana,” a mature female voice says in isiXhosa.

“In other exciting news”

There’s a joke about someone who fell off their “transportation device”, and then the ad continues: “Let’s give a big round of applause to Jambase. He is our ‘sorcerer of the month’. He far exceeded his quota of people to turn into zombies. Well done, you super-sorcerer you! In other exciting news we now have MWEB internet. That, witches and warlocks, means we can now send curses via tweets.”

But it is an ad about witches, so — “double, double, toil and trouble” — Damon Leff, the founder of the South African Pagan Rights Alliance, declared that his organisation was “deeply offended” by the ad. 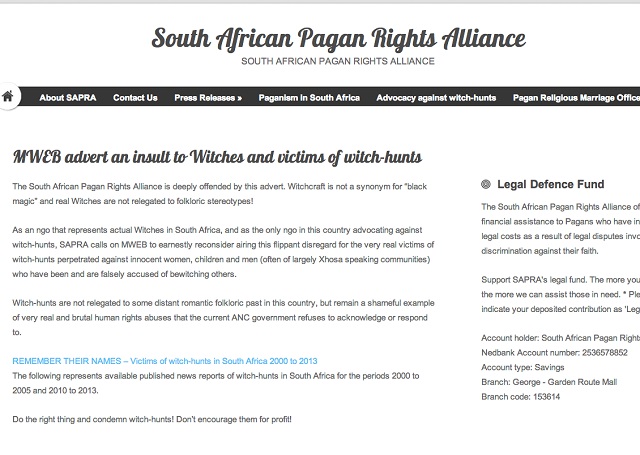 In a release he stated: “As an NGO that represents actual Witches in South Africa, and as the only NGO in this country advocating against witch-hunts, SAPRA calls on MWEB to earnestly reconsider airing this flippant disregard for the very real victims of witch-hunts perpetrated against innocent women, children and men (often of largely Xhosa speaking communities) who have been and are falsely accused of bewitching others.”

Frankly, I think there is an error in logic here. The ad is clearly humorous; it doesn’t ridicule witches, but rather creates a fun, fantasy world that is obviously not connected to reality. How that instigates or perpetuates witch-hunts is not logically connected.

By that same logic we should ban comics and TV programmes (of which there are a few) that may show witchcraft in a negative light — think ‘Sabrina’ and ‘Charmed’, as well as a whole bunch of horror movies.

Does anyone really believe that witches meet in the woods and fly around on brooms, let alone use Twitter and Facebook to send spells and curses? On the contrary, I think that humour disarms much of the fear and superstition that surrounds the topic.

And why is Leff speaking on behalf of the ixwele (herbalists) or amagqirha (diviners) of the Eastern Cape — isn’t that a little patronising?

Disappointingly, MWEB has taken the path of least resistance and, as reported in City Press, apologised for the “once-off” radio advert. Obviously MWEB was loathe to offend anyone.

“What the team was trying to do was to create a memorable radio advert that presented our offer in a light-hearted, tongue-in-cheek manner rooted in the culture of the consumers we were talking to,” it explained in the press release quoted by City Press, adding that the advert “was produced very much in the style of the isiXhosa radio dramas that play on isiXhosa stations”.

Surely Leff could have taken the high road and, instead of being filled with brimstone and damnation, he could have used the ad as a way of educating the public about the modern Pagan movement, something that would have encouraged free speech — and tolerance — and made us all a little wiser.

But decide for yourself.