A big hello to 2014, but I’ll forgive you for being a little trepidatious because it is an election year. Yes, we can expect a lot of political conflict this year because this poll is going to be fiercely contested.

In a year that’s poised for political friction, it warmed my heart to discover Advantage Y&R’s endearing advert for Mobile Telecommunications Limited (MTC), a cellular access company based in Namibia. I dare you to watch the ad and to try resist breaking into a broad grin.

The ad opens on a corrugated iron bus stop in what must be rural Namibia. The street is a dusty, sand road and the bus shelter frames a cool-looking young man and a Gogo sitting, waiting for the public transport to arrive.

The hipster-ish guy gets an SMS. Beep, beep it goes. He reads it, and then smiles. In a flash he leans over to the older woman sitting next to him (who’s busy knitting). What comes next is a big bear hug that makes the gran shriek with surprise and delight. 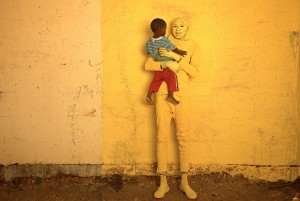 The camera pans out, and before that hug has ended, we’re seeing another: a woman with a bold yellow dress reaches out to hug two passers-by. The hug’s contagious; it’s a love virus.

And the invisible thread that holds this advert together is the story of how the hug spreads. It’s as if the camera travels throughout the length and breadth of Namibia to show how “giving a little goes a long way”.

In fact, that’s the payoff line for this mobile campaign — “Giving a little goes a long way”. The advert was made to showcase MTC’s festive specials at what appears to be very short notice, but does so much more than that

Little’s an interesting oke; he’s not just a commercial director but has also made a couple of documentaries. The most recent is a film called The African Cypher, which explores street dance in this country’s townships. The winner of the Audience Award at Encounters South African International Documentary Festival, and Best Documentary at Durban International Film Festival, Cypher straddles slums and suburbs. It joins the economic divides as it delves into the underworld that is isipantsula, sbhujwa or what is known in the western world as krumping.

For the MTC commercial Little did in Namibia, he worked with a local crew called The Power & The Glory Films. Like Little, Power & Glory has film experience rich in both commercial and documentary craft.

Speaking about the MTC hug ad, Little says, “I’m fascinated by the weird contrasts of urban Africa — visually and culturally — so it’s natural that it’s quite prevalent in my work,” and adds, “There wasn’t an art director, so we had to do everything with the locations and the cast.”

When you experience the story of this beautiful, viral hug, you’ll realise that what makes this idea work so well (in part) is the soundtrack. The visuals are backed by a soundtrack, created by Simon Kohler, which is quite folksy.

I hear that the song has become so popular that it may be released as a radio single. Little says he has a very collaborative partnership with Kohler: “We work together from the very beginning. Simon comes on set as the sound recordist, which would normally be a different person from the composer. This allows him to listen to all the scenes on set, so that by the time he starts composing he has a clear idea of where we’re going.”

The ad’s by no means a pioneering or novel idea. It’s the execution that makes it stand apart. The casting, acting, film work and soundtrack are all excellent and the sum of it makes for an experience that feels a lot more like watching a feel-good little movie, than an ad.

In a world where mobile service offerings are increasingly reaching parity, it’s the brand backed by brilliant customer service that will make operators stand apart. Smart campaign, MTC; now let’s hope your product experience and delivery are just as good.

Lastly, a happy new year to everyone. It’s going to be a testing year, but let’s not forget that a little warmth, a little kindness and a bit of compassion can go a long, long way.