Don’t you love it when intelligent people apply smart thinking to innovate solutions to social problems? If you’re like me, you’ll love what the team of clever clogs at M&C Saatchi Abel have come up with to try and help Cape Town’s homeless.

What’s remarkable about this campaign — called The Street Store (thestreetstore.org) — is that it’s a good idea but also flexible and inexpensive.

The brains behind this great concept, which was created for The Haven, are art director-cum-designer Max Pazak and agency copywriter Kayli Vee Levitan [insert a big round of applause here].

The Haven is a welfare organisation that provides “temporary shelter, physical care, social welfare and family re-unification services” to adults in the Western Cape who are homeless, and often referred to as ‘vagrants’ or ‘street people’.

What I really enjoy about the Street Store campaign is that it doesn’t encourage people to buy something they don’t need. Also, it isn’t a charity ad that scares or shames people into action. Instead, it functions on a completely different level, and is based on different values.

Conventionally, those who depend on charity have not had much of a say as to what they get in terms of hand-outs, or how they get charity. Let’s take the issue of clothing to explore this thinking.

Usually, bundles of used clothes are distributed in an ad hoc manner, and the receiver is expected to just accept what they are given. It’s this whole idea of not “looking a gift-horse in the mouth”.

But, if you look at this from the receiver’s perspective, doesn’t that kind of attitude rob that individual of personal choice?

And, let’s face it, for those who are down on their luck and reduced to begging, there can be very little dignity in life and seemingly not much choice.

What’s really cool about M&C Saatchi Abel’s Street Store is that with a simple but smart concept, it does much to restore dignity and visibility for those who have become the “invisible citizens” of society.

The launch for the Street Store mid-January 2014 was done in Cape Town, on Somerset Road, in collaboration with The Haven on Napier and The Salesian Institute.

“A Street Store that is made entirely out of posters can literally be put up within a couple of hours anywhere,” Mike Abel tells AdLip.com in a video interview (see below), explaining that the posters which are the boundaries of the store also function as merchandising for the clothing.

Abel says that the pop-up store “bridges the gap between those that have and those that don’t”, adding: “Very often, people will just drop a big black bag of old clothes off somewhere and they don’t really know what will happen to it. 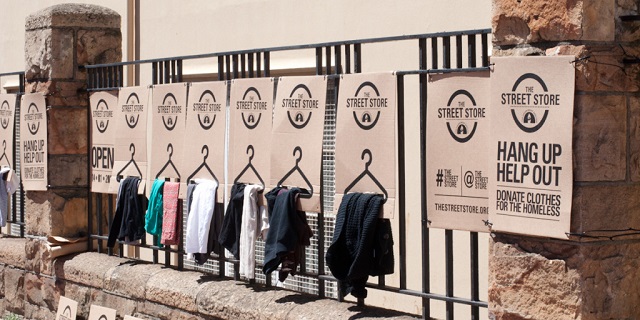 When the first of these stores were launched in Cape Town on 14 January, the donated clothes were displayed on a cardboard hanger/display device that also featured the Street Store branding and slogan: “Hang up, help out.”

Over 1000 homeless people visited the store on launch day, and were given the opportunity to pick and choose and put together an outfit that suited them. For many who have grown up in poverty, this was a rare experience.

In an interview with Between 10 and 5, Levitan explains the thinking behind the conception of the Street Store: “Working in Greenpoint, we often see homeless people, and we wanted to do something to help — but it’s tough. 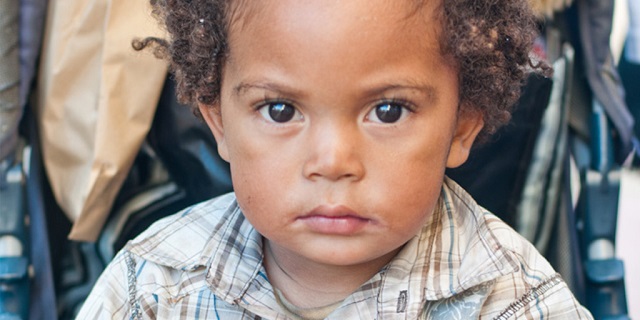 “We needed a middle ground”

“Where do you take donations, and who gets them? We needed a middle ground. Somewhere easy to donate and easy to receive. So we took to the street with nothing but a couple of posters.

“It makes it easy to make donations as it is hosted in a public area, but it also dignifies the receiving process. Instead of feeling like they’re having old clothing thrown at them, the homeless get to have a full shopping experience. They can browse through the clothes, we’ll help them find an outfit they like, it’s wrapped up and off they go,” she continues.

“After working through the idea with The Haven, we realised that homelessness and poverty isn’t a uniquely Capetonian problem. It isn’t even just a South African problem. It’s world-wide. So we asked The Haven if they would mind if we made the concept of the store completely open-source. And they agreed! So now anyone, from any city around the world can host a Street Store,” Levitan says.

It’s brilliant that these design elements are open source, because this means anyone can partner with an organisation for the homeless, and organise a Street Store. There are three posters put up at the venue, asking people to drop off clothes and shoes the next day; on the day, the “hanger” posters are put up and the clothing arranged.

The design of the posters is bold and clear. The font and graphic elements are printed on a brown paper board, which sounds boring, but it works in a simple, zen sort of a way — it’s even classy, because the design is so clean.

It doesn’t take months or years to offer quick fixes to our city’s social problems. All it takes is people with smart, workable ideas and partners who can help them apply it in a way that makes those suffering more visible.

Tagged Ad of the WeekPop-up Street Store For The Homeless