Just when you thought you’d seen all the “Best of 2013” lists and articles, here comes Richelieu with a loony parody of Katy Perry’s “Roar” that takes more than a few pot shots at the events of the past year.

The campaign was conceived and created by South African digital agency Liquorice, which enlisted the talents of infamous comedy duo ‘Derick Watts and the Sunday Blues’.

Miles Murphy, Liquorice’s managing partner, explains: “We’re hugely proud of pairing up two great South African traditions: sipping a Richelieu and having a laugh. It’s a look back at everything that made this year awesome. And weird. But mainly awesome.”

The four-minute video shows the duo doing a ‘live’ presentation of the song for what appears to be the Richelieu board — or perhaps it’s the marketing team. Actually, it’s in all likelihood a team of actors.

Regardless, they’re all drinking brandy, surrounded by French flags, and looking quite bored by the prospect of being sung to by two young white men with a boom box.

What follows is an outrageous, over-the-top performance, with the duo mischievously changing into the various characters they sing about. The pop-culture celebrities who get the thick edge of the wedge from the comedians include Lance Armstrong and Sachin Tendulkar, as well as Oprah, Justin Bieber and (of course) Miley Cyrus.

A rap break in the middle portrays Kanye West getting the idea for his child’s name from a GPS instructing him to head “north west”. 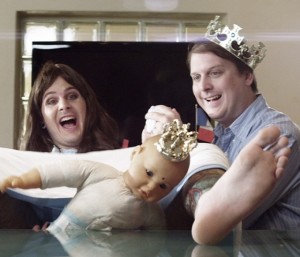 Richelieu Round Up: Royal baby parody

The royal baby gets a mention, too, with the duo wondering if his hair will be ginger, like his uncle Harry. “The last thing that we need,” the lyrics go, “Simply Red sitting on the throne.”

Naturally, the Richelieu board/marketing team greets the performance with a shocked and stony silence, followed by: “There’s no ways we are going for this.”

It’s all quite silly and irreverent, and a great, light-hearted start to the year. It indicates a willingness upon the part of Richelieu to play a little with its image and aim for a new, younger target market.

It’s a brave salvo, because good quality brandy (or cognac) is traditionally sold to a more mature drinker, and this could be perceived as an attempt to be “hip and happening”. But I think the campaign succeeds, simply because of the irreverent and YouTube-ish way in which it approaches the topic.

Brandy is not a big seller worldwide, although it has gained some popularity in China. In SA, it has something of a poor image to overcome. Cheaper brands are meant only to be consumed with mixers. The joke goes that it belongs to the ‘1-2-3 culture’ — 1-litre brandy, 2-litre Coke, and a 3-litre Ford.

Nonetheless, sales are improving due to the rise in ‘mixology’ culture, where cola is not the only option. Despite this, sales figures are still inferior to whiskey and other spirits, so there is definitely room for improvement. The younger market, with its greater disposable income, would thus be a slam-dunk, as long as the marketers can overcome the image problem.

Richelieu Round Up: Miley Cyrus parody

Loosening up, shedding the tie and doing Miley Cyrus twerks might just be the answer for this brand, if it’s to grow its market and take on the competition.

If there’s any complaint that may be laid against the ad, it might be that the humour is very regional. The whole production has a very “Cape Town” vibe about it. It’s likely that if Richelieu wants to attract the younger crowd in Jozi, it’d have to go a very different route — culturally, Cape Town and Jozi are becoming ‘like two different countries’.

While Richelieu needs to be commended for supporting local talent and being brave with the whole YouTube attempt, it would do well to understand this cultural chasm. This is something that all Cape-based brands will need to understand. The experience of life in Cape Town and Jozi are worlds apart — so, too, are the people who populate the disparate cities.

That said, this shouldn’t deter adventurous marketers from taking risks to attract new audiences, and hats off to Richelieu for doing exactly that.